See a burning building? Hold all calls to the fire department. Canadian artist Isabelle Hayeur fools passerbyers with her installation, "Fire with Fire", an artwork that creates the illusion of a fire-swept four-story heritage building in the downtown eastside of Vancouver.

"The Downtown Eastside is the oldest neighbourhood in Vancouver; it is also the most run-down. This historic area is infamous for being plagued by social problems due to poverty. Before falling prey to serious urban decay, it has known brighter days, and was even the city's business hub until the 1980s. Derelict for over twenty years, in more recent ones, it has started to be sought after again. The Downtown Eastside is undergoing a major mutation —witness the newly renovated buildings and the constructions sites that now dot the area... 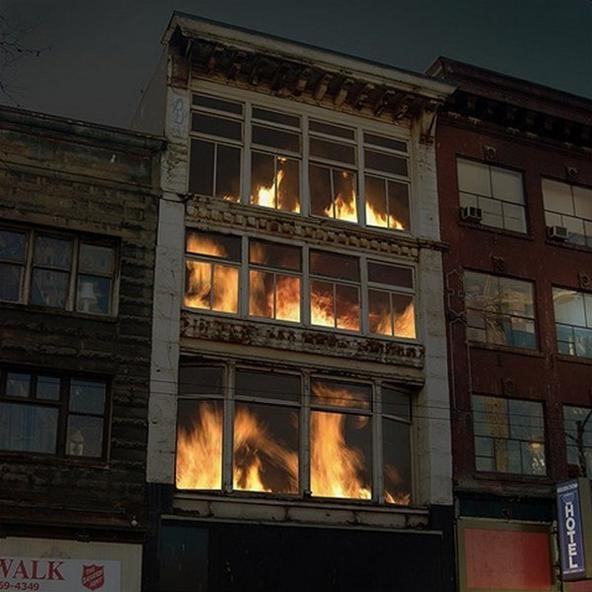 It is striking that the history of the Downtown Eastside began in destruction and disappearance. In 1886, soon after the city was incorporated, the Great Vancouver Fire swept down on the neighbourhood and razed almost all of it to the ground. The video installation Fire with Fire recalls this troubled period of Vancouver's history. It also alludes to the neighbourhood's present conditions by reminding us that many lives have been consumed there, worn down by years of homelessness, drug use, street prostitution, and violence."

This is not art, it's nothing more than projectors playing a video of fire over the windows, a prank that distracts firefighters from actual fires and emergencies that put other peoples lives at risk.

Psh, who's gonna fall for that not to scale fire anyways. It looks ridiculous.